The WTF Podcast – Episode 10: Do you have free will?

Having free will means you can make a decision that is yours and yours only. So do you have it? I thinks so – but there is one big caveat.

The free will most people think they have, they aren’t actually using. This is a big misinterpretation of spirituality and one I dive into in this episode of The WTF Podcast. 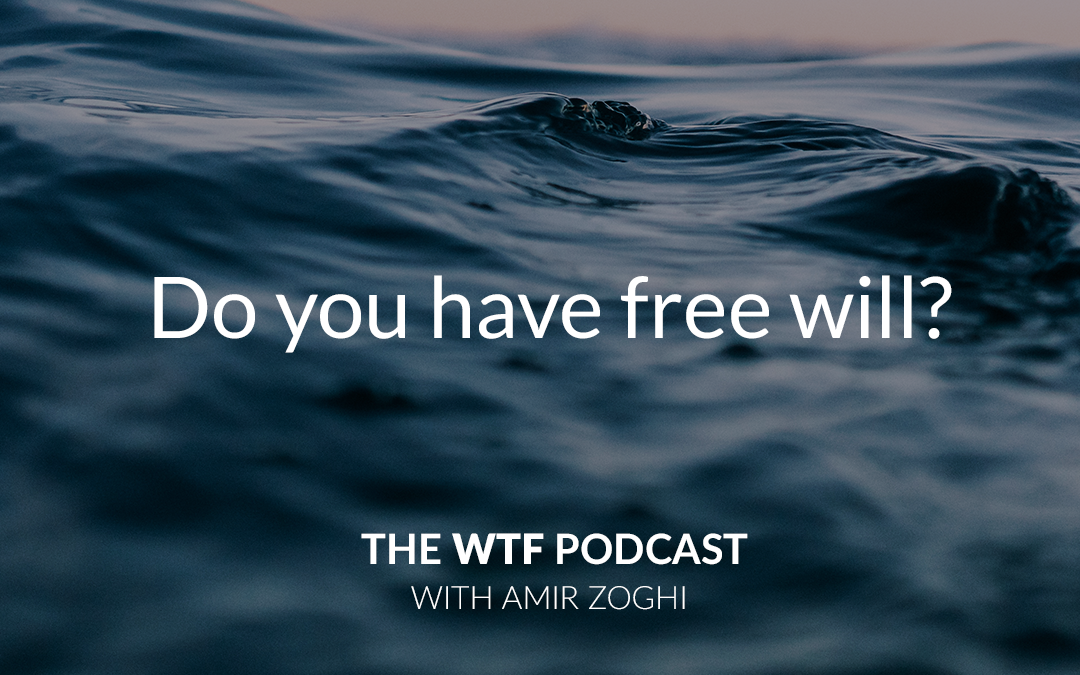 Or listen on the Apple Podcasts App or Spotify

Hi, this is Amir Zoghi, speaker, coach, and aerobatic pilot. I’m on a mission to inspire, move and transform people’s lives. This is the Wisdom, Truth & Freedom Podcast where I share mind-blowing insights about spirituality, self actualization, and transcending those limiting mindsets in order to live in an unlimited lifestyle and to make a dent in the universe.

As always, we’re not going to just to answer that question, we want to dig around that question and really look at what is the misinterpretation? Well, the misinterpretation here is what free will is. Okay? Because if you ask yourself that question, what is free will? Well, I guess, if we’re having a conversation together around this right now free will is when you have free will to decide something, that’s free will. And then the question is, do you have that? Now you probably already have an answer that. You have a belief. Maybe some of you don’t and you’re open to an answer. But let’s break down what is free will. Because free will, I want to put that underneath the magnifying glass if you like. Because free will itself means that you have the will to make a decision that is purely yours and yours only and is a decision that is purely for this moment and this moment only. Don’t get me wrong, it may be a decision you’d be making for the future, but as you probably know, the future and what happens is all down to the decisions that you make right here, right now.

You’re starting a new relationship, let’s say, right? And you’re not just wanting…you have a feeling you want to do this. Like there’s a gut feel. A “knowing” if you like, a feeling that this is what you wanna do. And I’m not just talking about an intuitive feeling. In a previous podcast I talked about what an intuitive feeling is how you feel about the way you interpret the story. Okay? I wont to go into that in this podcast. If you haven’t seen that, I would go back and you’ll probably find details about that other podcasts below. So that’s intuition. Intuition is when you are gauging how you feel about the story and did the way you’re interpreting the story. It’s how your reading the story. Whereas a feeling is a knowingness that has presented itself from the unknowing.

So the feeling that comes from deep within, it comes from the unknown and presents itself as a knowing. That’s very different to just intuition. Intuition is a life-skill that is important for your everyday living. But the big decisions, the big movements, where you make a dent in the universe is with that knowing, the feeling, your true feeling. Anyway, that’s a different podcast. Let’s get back onto this one. It’s very related. That’s why I brought that up. Because what you are experiencing what is not free will…..we’re talking about these two examples. That’s where we were. Talking about these two examples where you have a feeling and a real feeling that you want to do this business, maybe a potential new relationship. I’m just using two different examples there. And let’s say in the past you had a bad sour experience in a relationship. Or in the past, you know, you had a failure in a business, right?

And then you make a decision not to do this business. Even though you feel too, you decide not to, because of a past experience. I’m sorry, but that’s not free will. That’s called influenced will. Because when we talked about free will, it’s your decision, entirely your decision for this moment. There is nothing from the past that is influencing this decision that is not free will. If you’re making a decision not to get in a relationship or dip your toe in only and or to avoid the relationship entirely because of a sour experience you’ve had in the previous, I was gonna say previous life, we’re talking about this life only… but previous experience. I’m sorry that’s not free will either. That is called influenced will because your decision, if you feel a love to start this new relationship right, but you are afraid and you decide not to or you even walk on, you know, just dipping your toe in and like cautiously rather than with an open heart. That’s not free will.

That’s called influenced will. So you can kind of gauge what I’m saying here. We do have the opportunity to live with free will. For me, free will is when a feeling that comes from the unknown and presents itself as the knowing, the feeling, right? And then you make a decision to follow the decision that was already made because that’s what it feels like when that feeling presents itself from the unknown and presents itself to you as a knowing. It feels like the decision is already made. It wasn’t up for a decision. It wasn’t even up for discussion. The decisions made. I then decide to follow the feeling or decide to follow the decision that’s already made. To me that is free will. But that’s freaky. That freaks most people out because people want to know why, why am I following this decision? And how is it going to be safe and how is it going to improve and better my circumstances, my outcomes and my results?

That’s not where free will comes from. All that is influenced. It’s influenced by your preferences of feeling safe rather than unsafe. By your preferences of having the pros rather than the cons. They’re all influenced. Whether it’s influenced from the past experiences or influenced from some future ideals that you’ve made up in your head. That’s influenced will. So you answer that question to yourself. I can get pretty passionate about that. As you can tell. I’m not here to answer that question today. I’ll tell you what I believe. I believe we do have free will. You can come to your own conclusion. But I also believe that most people do not use their free will. They use influenced will and therefore that’s why they’d notice they had repeat patterns. Repeat old patterns.

They make decisions for the future. They repeat their old patterns again. And it seems like you know, you’re living in this bubble and you’re continuously living in the same circumstances, same limitations, same smallness, same, you know, lots of work you need to do and lots of struggle and push. Come on, right? There’s no struggle like that when you’re making a decision that is completely true for you, right? But when you make a decision that’s completely true for you, it has no reference points. It has no influence. Love, you’ve heard me say so many times, has no reasons. So when you are making a decision with love, when you’re making a decision that has presented itself, by the way, when I talk about from the unknown, the unknown is infinite love. Infinite love. And you know that might not make a whole lot of sense for you right now. Especially if you’re hearing this for the first time. But if you’re someone who’s done my program, The Wisdom, Truth and Freedom Experience…not the podcast, but the actual experience, actual program I have online (which by the way is free if anyone wants to go and experience that)…you’ll know what I mean by that, when I say what the unknown is. This big emptiness, this big interpretation of a void is not just a void. It’s not just an emptiness. It’s actually a fullness. It’s actually a completeness of who you are. When that unknown, when that feeling from the unknown presents itself to you in a “knowing” and you have the willingness, the ability and the courage to make a decision to follow the decision that’s already made — without looking for reference points of the pros and cons. That is true will.

And that is your podcast for today. See you next time.

If you’d like to dive deeper on learning how you can finally start living and doing what you truly love in like, watch The WTF?! Experience, my transformational foundation program. It’s free right now and streaming online. Click here to get your access.