Success is not by chance, it’s a mindset and once mastered, anyone can live a life of LIMITLESS possibilities.

As a young man navigating life, Amir found the challenges that many find on their journey to creating success…. He failed high school, went nearly bankrupt twice by the age of 21 and experienced multiple failures in business. But you would never imagine that looking at him today. How did he go from multiple failures and a truck load of debt, to becoming a commercial aerobatic pilot, owning his own aviation company and traveling the world as an inspirational speaker and mindset coach?

He did it by using his Limitless Mindset Programming (LMP) Method.

Amir credits his LMP method as being the greatest contributor to how he is able to live his life today. It’s not what Amir has accomplished that’s inspiring, it’s actually the lifestyle he’s created for himself and his family — success without the grind and hustle.

It’s his capacity to live his life as though he doesn’t need to work for a living.

This doesn’t mean that he doesn’t work hard, it’s just that the results he gets come effortlessly for him. But it wasn’t always this way. Prior to discovering his LMP method, life and business was effortFUL, like it may feel for you right now. No matter how much blood, sweat and tears he put into his plans and goals, success seemed just out of reach. Worst of all, when he did get some traction, some success, he would feel empty about it, always wanting more… So what changed? What is this LMP method?…

Join Amir in April as he tours the east coast of Australia and shares how to gain LIMITLESS Success (success that is effortless). He will be sharing the below 7 principles from his LMP Method:

Regardless of where you are in your own journey to success, there is always an expansion in your mindset that is required to go to the next level. It does not matter what type of success you are looking for — be it in your career, business, finances, athletic performance, health, etc — the principles required to achieve that LIMITLESS Success are the same. It starts with your mindset.

In this one-day event, Amir will share how he went from failure after failure to a LIMITLESS lifestyle by using the 7 LIMITLESS Success Principles. Upgrade your mindset and live the life you came here to live!

When not soaring over the skies of Sydney – Australia, Amir is well known for helping others soar in their personal and professional lives as a mindset coach. Amir is sought after for his practical and relatable mindset teachings. As an entrepreneur, Amir has multiple successful companies. He doesn’t grow them with your average strategies, goals and plans. His strategies for success in life and business start with understanding the limitless capacity of the mind and harnessing a deep understanding of how to manifest your outcome and results effortlessly. There is nothing he is more inspired by than helping others do the same. 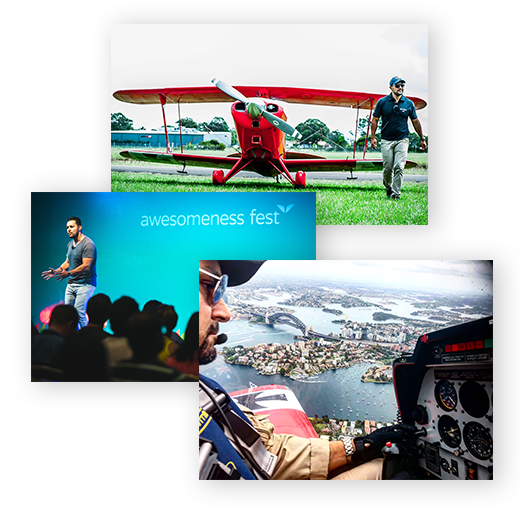 GET YOUR TICKET NOW